Monday, March 11th 2019, 5:43 pm - The UV-filtering chemicals in sunscreens protect us from sunburns and skin cancer, but their reported effects on corals mean they’re about to be banned on many beaches even though there are other circumstances doing corals more harm.

Many families will soon escape the winter to seek warmer, sunnier climes. Swimsuits and sunglasses will invariably find their way into suitcases, but one common item might be giving people a little more pause than it once did: sunscreen.

Why? Well, with some fanfare back in November, Palau — a beautiful country surrounded by coral reefs in the western Pacific Ocean — announced that it would ban certain kinds of sunscreen by 2020. Hawaii and Key West, Florida have passed similar laws that will go into effect in 2021, and it’s likely that other jurisdictions will follow suit.

The UV-filtering chemicals in sunscreens protect us from sunburns and skin cancer, but their reported effects on corals mean they’re about to be banned on many beaches even though there are other circumstances doing corals more harm.

HOW BAD ARE SUNSCREEN FOR CORALS?

The first inkling that sunscreens might be bad for corals came in 2008, when Italian researchers revealed that sunscreens, and some of their component chemicals, caused various species of corals to bleach.

Bleaching is a phenomenon that describes the whitening of coral tissues in response to stressful conditions. When corals are taxed by water that is too hot or too cold, too rich in nutrients or too polluted, the colourful algae that normally live in their tissues in a mutually beneficial, food-sharing relationship are expelled, leaving the coral bone white. Bleaching is reversible if the stress ebbs relatively quickly. If not, the corals starve to death. 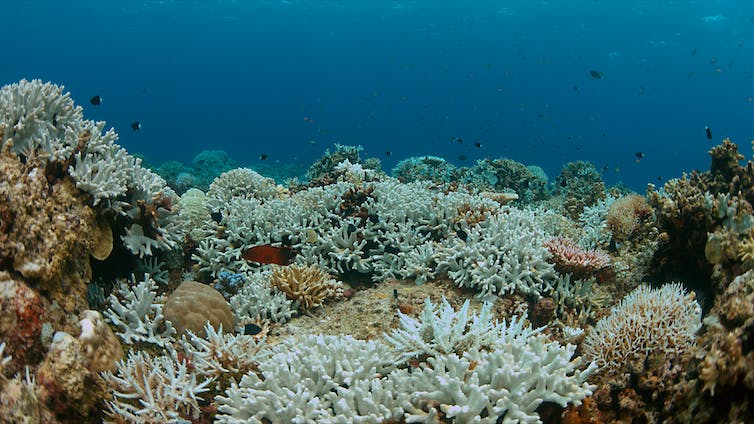 Corals get their colour from the tiny algae living in their tissues, and become white or translucent when stressed. Shutterstock

It seemed that sunscreens and, in particular, their common ingredient oxybenzone, were yet another thing that made corals unhealthy. Since then, a handful of studies have added to our understanding of the effects of oxybenzone and other sunscreen components. We now know, for example, that at their earliest life stage, corals appear to be very sensitive to these chemicals.

When little swimming coral larvae are exposed to oxybenzone in the lab, they become deformed, bleached and damaged. It turns out that the chemical — in a dark twist worthy of a Hollywood horror story — promotes bone formation and makes the larvae encase themselves in their own skeletons.

We also now know that sunscreen affects a range of other invertebrates found on coral reefs, including flatworms, algae and anemones.

Some sunscreens have inorganic, mineral filters to protect skin from UV rays, such as nanoparticles of zinc oxide and titanium dioxide that are thought to be more environmentally friendly than oxybenzone. Unfortunately, tests showed that exposure to zinc oxide interferes with the photosynthesis of the helpful algae living in coral tissues and leads to coral bleaching. Titanium dioxide particles coated with manganese or aluminium seem to have little effect on the algae and caused no visible change in coral colour, so sunscreens containing these might be safe for corals.

FROM THE LAB TO THE REEF

It seems like the science is settled then: traditional sunscreens are bad. Wait, not so fast.

The experimental conditions that characterize the studies done to date are a far cry from a living coral reef. The standard method to test the effects of sunscreens involves taking small bits of corals, bringing them into the lab and exposing some, but not others, to various concentrations of sunscreen (or individual chemicals), and then measuring the number of algae released, the colour of the corals, the number that survives, and so on.

The exposure to the chemicals is usually acute — it is short and intense — and it probably doesn’t mimic what corals are exposed to in the wild, in terms of duration or concentration.

In fact, we know little about the concentrations of oxybenzone and other sunscreen chemicals in coastal areas. But we do have some information. On Oahu and Maui, for example, water samples from public swimming areas contain oxybenzone, but usually in exceedingly low concentrations — lower than those causing negative effects in the laboratory. Concentrations were higher on St. John in the U.S. Virgin Islands, with the highest levels on the most popular beach. 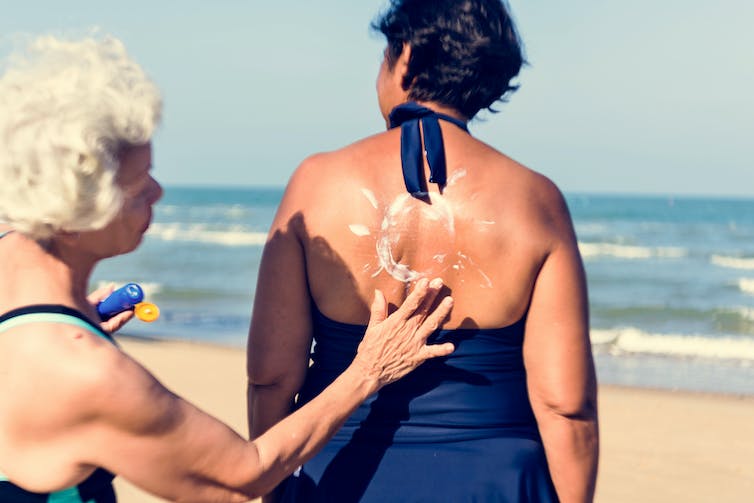 Oxybenzone protects skin from UV radiation, but some research shows that it and other chemicals can seep into the water while swimming or surfing. Shutterstock

Before jumping to conclusions, it’s worth remembering that oxybenzone is used in a range of household products and can enter the marine environment via routes other than bathers. For example, the sediments near waste water outfalls in California where, obviously, no one swims, have high concentrations of oxybenzone. (And at these concentrations, oxybenzone feminizes male fish, but that’s another story!)

It would also be quite imprudent to extrapolate from the bleaching effects of sunscreens on coral larvae seen in the laboratory to the bleaching of entire reefs, where so many factors stressful to corals overlap and interact.

In the real world, where there are many bathers, there is also a lot of infrastructure to support tourism, such as hotels and marinas, and its byproducts, such as waste water, pollution and fishing. In fact, if sunscreens play any role at all in causing coral bleaching in the wild, it is likely to be a very minor part compared to the massive, well-documented effect of ocean warming on coral bleaching.

WHAT SHOULD YOU DO?

The precautionary principle suggests that people should always err on the side of caution. In the absence of robust evidence, suggestive data should be enough to justify a change in policy or in personal behaviour.

But foregoing sun protection altogether to help coral reefs is not an option — the evidence linking UV radiation to DNA damage and skin cancer is incontrovertible. The alternatives are to leave the sunscreen at home and replace it with clothing and head wear with a high Ultraviolet Protection Factor (UPF) rating, or buy “reef-friendly” sunscreens lacking oxybenzone. 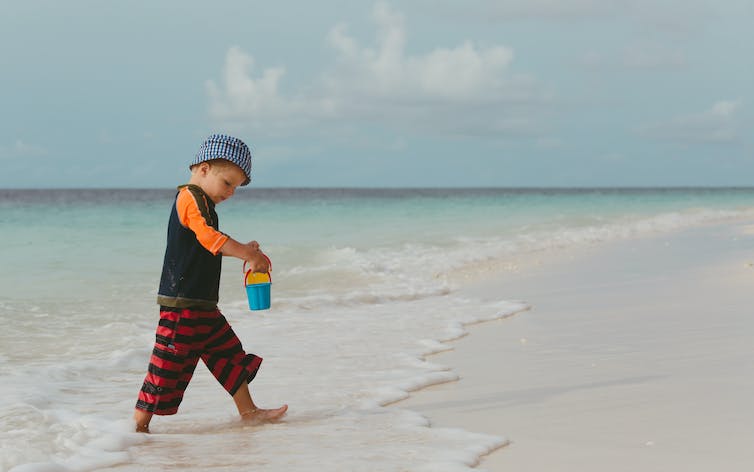 Another choice, of course, would be not to fly to that tropical destination. This would be the action that would contribute in the most direct way to reducing the most important threat to coral reefs: fossil fuel-driven climate change.

This option is unlikely, however, to be palatable to those many people looking forward to digging their toes into warm sand. It is much easier to buy the right sunscreen, or to ban potentially harmful ones, than to address the most pressing challenge of our time.