Saturday, May 9th 2020, 2:44 pm - Temperatures along the shores of the Arctic Ocean have the chance to hit the double-digits, while parts of southern Ontario will be within several degrees of the freezing mark.

Just a couple of months ago, Northern Canada was under a deep freeze. Dawson City plunged below -40°C and allowed the coldest air on the planet to venture from its usual home in Siberia into Canada’s northwest.

As we now enter the second week of May, Dawson has a more appealing seven-day forecast than Toronto.

Is this that unusual? Surprisingly, no. And here’s why. Back in April, a trough began to shift eastward over North America and a region of warmth began to develop over the Central North Pacific. This has allowed ridging to start to develop and move towards the Pacific coast while remaining behind the dominant trough over Central and Eastern Canada.

This ridge has now reached the coast and is able to transport exceptional heat from the U.S. Southwest, up the Pacific coast to British Columbia and as far north as Yukon, driving temperatures to up to 15 degrees above seasonal. In the trough, frigid air is driving temps nearly 15 degrees below seasonal across the Great Lakes and Eastern Canada through the middle of the month.

This pattern has made for some entertaining city forecast comparisons. Play the videos below and attempt to guess the cities.

It's quite the spectacle to see Dawson City nab a nicer weather weekend than Toronto, but two polarizing anomalies make this one a reality. A lobe of decaying polar vortex treks across Ontario, while an anomalous ridge builds over the Yukon interior the weekend, giving some there a shot at mid-20°s. By the spring equinox, Dawson is gaining about 40 minutes of daylight each week. Although solar energy will increase proportionally, the climatological warming is delayed thanks to the time needed for the atmosphere to transport the warmth northward from the lower latitudes.

This process takes place every year and is the basis for the seasonal changes. Within this pattern, weather can throw a few curveballs.

Surprisingly, one of the southernmost cities in Canada failed to pick up a warmer Saturday than Inuvik, N.W.T, a couple of hundred kilometres north of the Arctic Circle. Oh, and by the way, an average temperature for Windsor this time of year is about 20°C.

We can take this step further and hypothetically lounge along the shores of the Arctic Ocean this weekend, where temperatures precariously close to the shore have the opportunity to hit double-digits. Keep in mind, this is about 4,500 km northwest of southern Ontario. Before you feel too jealous southern Ontario, here's the current view – a whole pile of sea ice remains. Arguably, the air across the Lower Mainland and Fraser Valley is a little on the sultry side this weekend, while Sault Ste. Marie seriously struggles to get above the freezing mark for a daytime high. To put this in perspective, the overnight lows across parts of southern B.C. are expected to be a mild 14-15°C at times, about 15 degrees warmer than the high temperatures expected across parts of northeastern Ontario by Friday.

While the climate normal represents what can be expected at a given time of year, the weather is what produces the outliers from this expectation. The extremes happen when multiple weather influencers come together in a “perfect storm” to develop unusual temperatures or precipitation amounts or types. 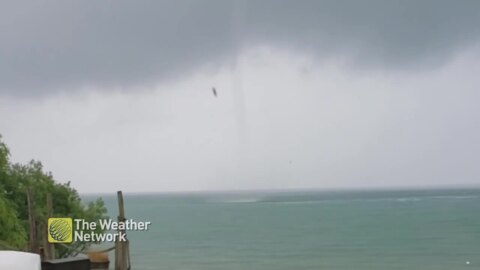