Thursday, April 18th 2019, 4:46 pm - Toward the end of each summer, grizzly bears in Alberta’s Rocky Mountains gorge on the tart red berries of a shrub called Canada buffaloberry (Shepherdia canadensis). Lacking the salmon of coastal populations, the feast is the largest caloric event on an Alberta grizzly bear’s menu. This is the time when individuals gain much of the weight needed for hibernation.

But our latest research, published in the journal Nature Climate Change, shows that rising temperatures are advancing the development of plants like buffaloberry, pushing forward the timing of this annual buffet.

By the year 2080, buffaloberries in the Rockies will ripen nearly three weeks earlier than they presently do. We predict this change will alter the behaviour of the region’s grizzly bears, and perhaps threaten the reproductive rates of this vulnerable population.

Our work is based on a horticultural principle well-known among Canadian gardeners: that plant development is tightly linked to temperature accumulation. A plant needs a certain amount of heat to proceed from one phenological stage to the next — from flowering to fruiting, for example.

We found that this principle can be applied at any spatial scale, from individual plants to entire landscapes. Based on this, we developed a novel strategy that uses thermal observations from satellite remote sensing to track the seasonal development of specific understory plants, like buffaloberry, across huge areas.

This progression tracks Canada buffaloberry through a single growing season (April 30 to Oct. 7). The very brief ‘fully ripe fruit’ phenophase (seen here at the 14-second mark) is the only phenological stage of significant nutritional value to grizzly bears, highlighting the punctuated nature of this critical food resource.

The Intergovernmental Panel on Climate Change (IPCC) reports that human activities have warmed the planet by 1 C above pre-industrial levels. However, ecological communities do not respond to global averages. Regional changes, which can vary substantially from one place to the next, are far more relevant when trying to understand the ecological response to warming temperatures.

Phenology is the timing of seasonal events in plants and animals, and a powerful lens through which to observe the effects of climate change.

For example, the Japanese have tracked the emergence of blossoms on Kyoto cherry trees for more than 700 years. These records have allowed modern researchers to reconstruct springtime temperatures in Japan since the ninth century, revealing cold periods associated with long‐term solar cycles.

The impact of climate change does not end with plants. Shifts in plant phenology create other indirect responses that can reverberate throughout the food web. Scientists have a term for this: phenological mismatch. These occur when the seasonal timing of one interacting species falls out of sync with that of another’s. For example, advances in the timing of vegetation development in Greenland have hurt populations of caribou, whose annual calving season no longer matches the timing of the most nutritious forage.

This is ecologist Eric Post’s “thief-in-the-night” analogy: the idea that it is the indirect effects of climate change that pose the greatest threat to ecological communities.

Of the IPCC’s four climate projections, our study used the moderate-emissions scenario (called RCP4.5). We found that by 2080, buffaloberry fruit across Alberta’s grizzly bear range will ripen an average of three weeks earlier than present. This advancement increases to 37 days in the higher-altitude subalpine zones.

A side-by-side comparison of seasonal buffaloberry development across Alberta grizzly bear range. The imagery covers the appearance of the first flowers to the dispersal of fruit. The red wave indicates the ripening of berries.

This shift will have major implications on the province’s dominant omnivore, as well as other local fruit-eaters. Grizzly bears are highly food-focused, and their movements are driven by the availability of seasonal food sources.

During late summer, scientists have documented individual bears in Alberta consuming up to 200,000 berries per day. Changing the timing of this critical food resource means that we can expect to see bears at times and in places where we’re not used to seeing them.

VIDEO: THE CLIMATE CHANGE AND CANADA

A THREAT TO REPRODUCTIVE RATES

An abbreviated, mid-summer ripening of buffaloberry will also widen the gap between prime feeding season and hibernation. This could alter the reproductive rates of Alberta’s threatened grizzly bear population.

Bears are one of the few species of mammal with “delayed implantation,” where eggs fertilized in the spring can wait for months before the start of pregnancy. Previous research has shown a strong correlation between the body condition of female bears in the fall and their reproductive success.

Bears in good physical condition give birth earlier, lactate longer and have more cubs. Bears without the necessary fat stores may not give birth at all.

These emerging phenological mismatches may also circle back to the buffaloberries themselves. The timing of spring flowering of buffaloberry will also shift earlier, perhaps putting it out of sync with the life cycles of the small-fly pollinators the plant depends on.

We don’t necessarily expect insect pollinators to advance their emergence at the same pace as buffaloberry flowers, since insects may also respond to other seasonal signals such as hours of daylight.

This is especially problematic for buffaloberry, since it is among the first shrub species to bloom in the spring, when pollinator populations are just beginning to emerge. At that time, there are few other options for pollination. 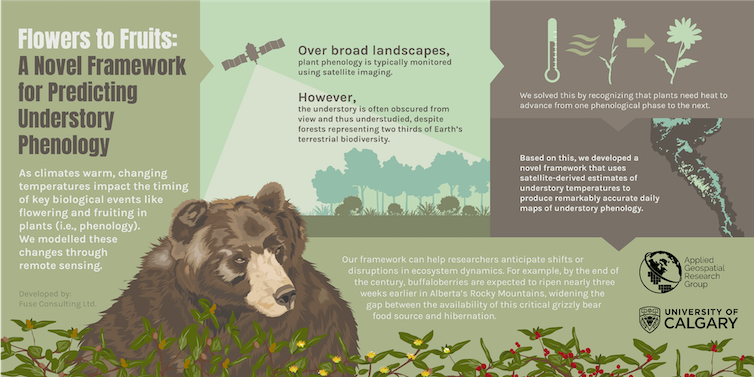 If there’s good news in any this, it’s that our growing understanding of the ecological effects of climate change can help policy-makers and engaged citizens make informed decisions. Carbon taxes, targets for greenhouse gas emissions and renewable energy strategies are among the key issues that require our attention.