Editor's Choice
Yes, pets can get COVID: Warning signs
In partnership with

Gathered around a crackling campfire, a flat calm on the lake, the sunset’s brilliant orange reflecting off the water, you hear a haunting cry echo through the trees. It’s the call of the common loon, a sound synonymous with the boreal wild.

To some people, the loon is a treasured part of cottage life. To others, loons represent a wilderness they long for in an increasingly urban, indoor and online existence.

But a new analysis of decades of research shows that pollution and other human activities are threatening the survival of this cherished symbol of northern summers.

Each summer, for the past 38 years, thousands of volunteers across Canada have taken part in the Canadian Lakes Loon Survey managed by Birds Canada. They monitor loons and their chicks to help scientists, like me, understand the long-term health of common loons and the health of the lakes they live on.

The data show that the number of chicks raised per loon pair has decreased in Ontario between 1981 and 2018, a trend seen across southern Canada.

These trends are alarming because loons tell us a lot about the health of our lakes, and declines in loon chick numbers suggest that lake conditions are also deteriorating. 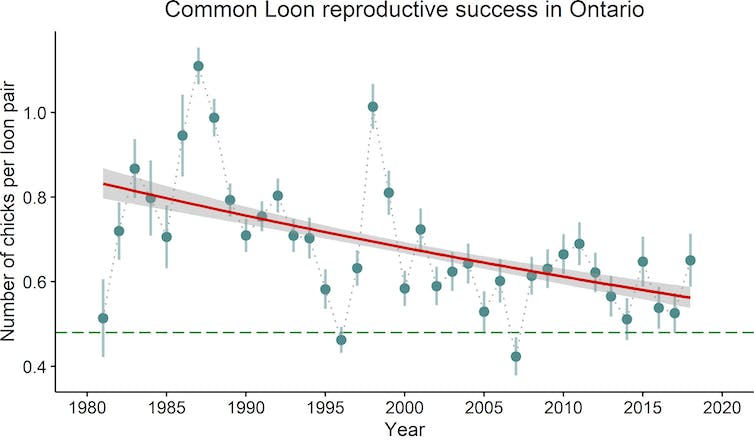 Common loon reproductive success declined in Ontario between 1981 and 2018, at times dropping below the level needed to maintain a stable loon population (0.48 chicks per loon pair, shown by the horizontal green line) (Kristin Bianchini)

Researchers measure loon reproductive success by looking at the number of six-week-old chicks produced per pair each year. By six weeks, loon chicks are about two-thirds the size of an adult loon and have a far greater chance of evading hungry predators, like snapping turtles, bass and bald eagles, and making it to adulthood. 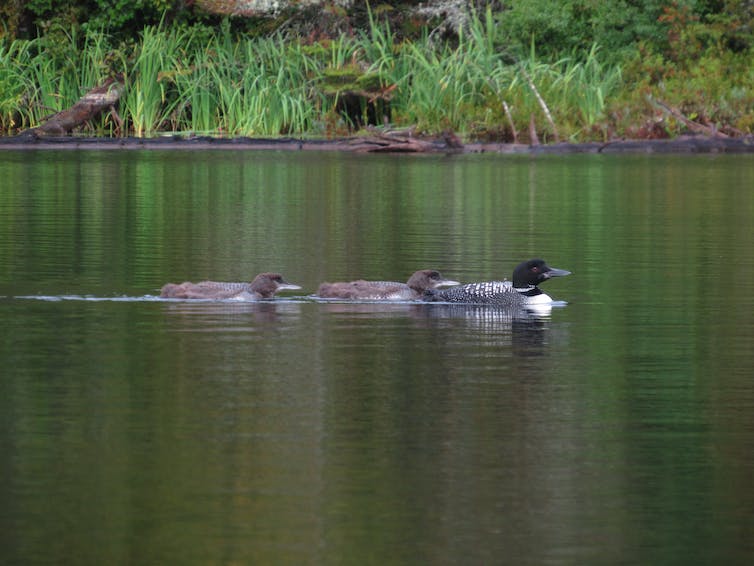 In the 1980s, loons raised a little over 0.8 six-week-old chicks per pair, per year, on average. Now they raise a little less than 0.6. This may not seem like a huge decrease, but other studies estimate that if the rate of chick production falls below 0.48 chicks per pair per year, then the number of loon adults may also start to fall.

Our study shows that Ontario may be on its way to dipping below the 0.48 threshold.

The production of loon chicks can be affected by many overlapping threats, including shoreline development, boating activity, harassment from biting black flies while loons are nesting and incubating their eggs and being eaten by bald eagles.

My research has found that loon chick numbers are declining faster on lakes with higher acidity and mercury levels.

Decades ago, large amounts of sulphur dioxide (SO2) and nitrogen oxides (NOx) were released into the atmosphere by vehicles and industrial processes, like metal smelting, manufacturing and oil refining, and the burning of fossil fuels. These chemicals caused acid rain and made many lakes acidic.

Acid rain was a big problem in eastern North America. Because of how SO2 and NOx are transported in the atmosphere, more SO2 and NOx were deposited in the east than the west. As a result, more lakes were acidified in places like Ontario than in western Canada.

Acid rain releases toxic metals, like aluminium, into lake water, which can interfere with the way that fish gills function. This can lead to decreased fish growth, reproduction and survival, which ultimately means there are fewer fish in highly acidic lakes. Fish can be depleted to the point where loon chicks do not have enough of the food that they need to grow and survive.

Mercury can also decrease the reproductive success of loons. Because loons eat fish, they are at the top of a lake’s food chain. Every time one animal eats another, the pollutants in the prey accumulate in the predator. Mercury can build up, reaching high levels in top predators, like loons.

Read more: Mercury decline in seabirds due to diet, not emissions controls

Although we’ve reduced our acid rain and mercury emissions, many lakes were so severely damaged by acid rain that they are still acidic, and it may take many more decades for these lakes to recover. Likewise, mercury can stick around for a long time in the environment.

We also think that climate change may be making things worse for loons. In acidic lakes, warmer temperatures allow more mercury to enter the food chain. This means that with global warming, a larger dose of mercury flows up the food chain and into loons — and boom — you get fewer chicks.

VIDEO: TWO MALE LOONS BATTLE WHILE A FEMALE LOOKS ON

HOW CAN WE HELP LOONS?

A great way to get involved with future loon conservation efforts is to become a member and support Birds Canada. If you want to contribute to future loon research, you can also participate in the Canadian Lakes Loon Survey. 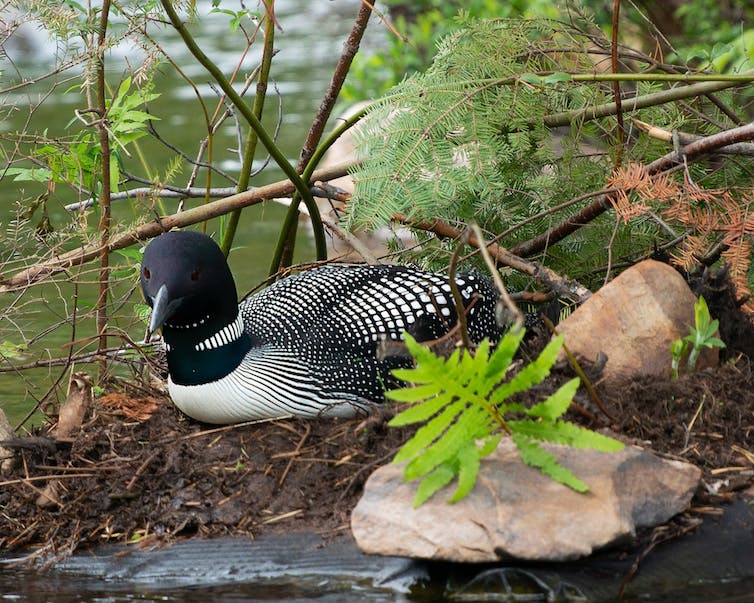 A loon nesting on the edge of a lake. (Jody Parks/Pixabay)

Cottagers and those who live on lakes can do a lot of other things to make their properties loon friendly:

Finally, if our hypothesis about the effects of climate change on mercury and loons is correct, then reducing carbon emissions that contribute to climate change may also help. 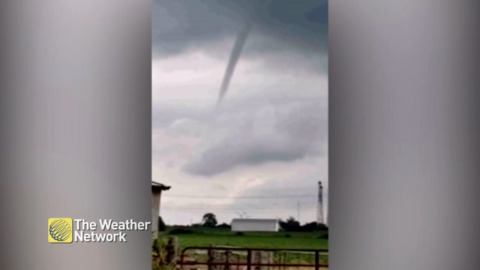