A green thumb can help guard your home against wildfires.

After a string of bone-dry summers, homeowners are looking for new ways to protect their properties.

"We have seen, over the last four years, a dramatic increase in the interest in living resiliently with our new wildfire reality," said Laura Stewart, president of FireSmart Canada, non-profit association focused on fire prevention.

"There is just a lack of awareness that we, as homeowners, there are things we can do, choices that we make to reduce the vulnerability of our homes and properties."

An estimated 11 million people across Canada live on what is called the wildlife-urban interface, land on the edge of a forest, bush or grassland, Stewart said. 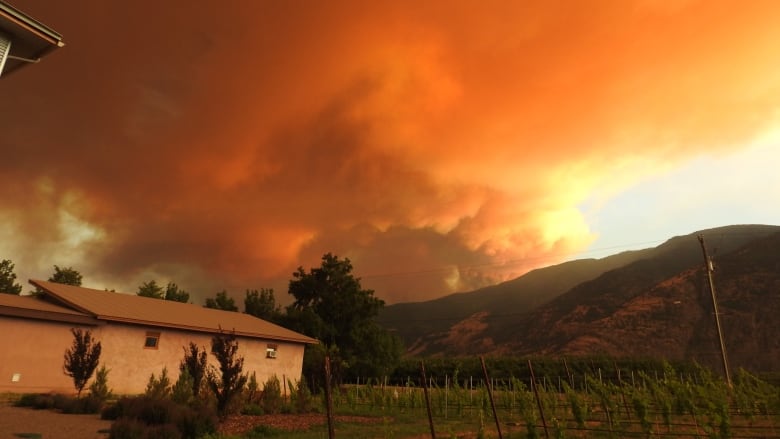 Smoke fills the air between Peachland and Summerland in B.C. on July 18, 2018, as wildfires threatened hundreds of homes in the area. (Nilmini Weera)

That desire to live close to nature can put people in danger.

"In a high-density residential setting when we're two metres from our next-door neighbour, that structure-to-structure spread is something like a domino effect," she said. "When one house ignites the next house is immediately vulnerable."

Even homeowners who can't make major investments in flame retardant roofing or siding can keep their yards tidy and free of brush, and clean their gutters and roofs regularly, Stewart said.

What people place in their gardens can make a big difference, she said.

"Research and science have taught us that 90 per cent of home ignitions that occur during a wildfire are caused by ember," she said, "so the choices that we make with our landscaping dramatically improve the survivability of our homes."

Dan Thompson, a researcher in the burn lab at the Canadian Forest Service headquarters in Edmonton, is among the scientists studying how fire moves from the forest and into urban and suburban areas. 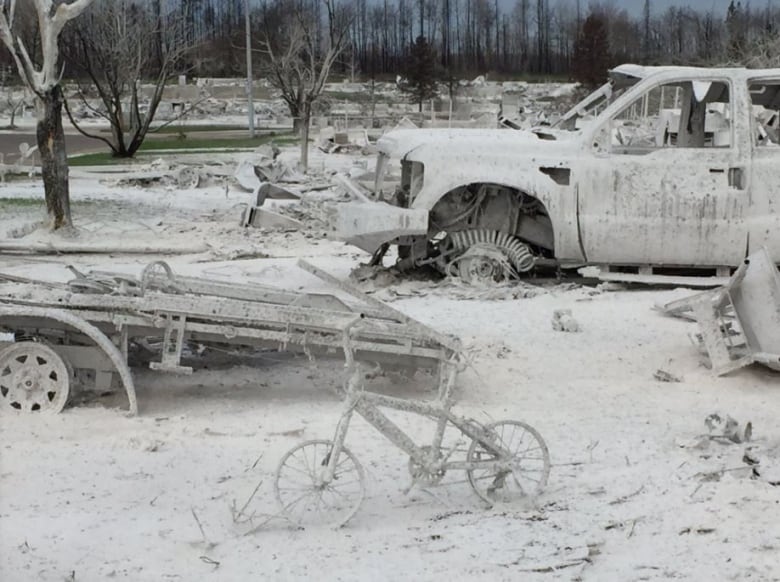 In May 2016, some Fort McMurray neighbourhoods were devastated by wildfire. (Andrea Ross/CBC Edmonton )

Some plants and gardening materials act as fuel for a fire, he said.

Wood mulch should be avoided, he said.

"The forest fire may be 100 metres away, but as it travels and lands on your front yard mulch, and we saw this a lot in Fort McMurray and places like that, the mulch can basically act as a fuel wick in order to endanger your house.

"This lofted dry mulch one can get in the spring can be really, really dangerous. It's really no better than having a campfire next your house in terms of its fire potential on those hot, dry sunny days."

Space evergreen trees and shrubs at least 10 metres from your home and leave twice that distance between trees. Keep them well-pruned and remove needle accumulations beneath the trees.

"What you don't want to have is plants like cedars or junipers that can act as a fire ladder," Hole said.

"If that's right up against your house, fire has easy access to your house. And those trees have a lot of oils and waxes in them, so they can burn readily.

"You've got to have that barrier around your house, it's that critical zone."

This article was written for the CBC by Wallis Snowdown