Located on the Northeast coast of Newfoundland, between Lewisporte and Twillingate, the small community of Birchy Bay has become quite familiar to viewers of The Weather Network.

When tourists would stop in, they often asked for pictures with Beverly's dog, Nukka.

"I started getting people from across Canada on vacation that would drop in to have their picture taken with Nukka," she says.

About ten years ago, Quinlan began uploading videos of her daily walks, with Nukka front row and centre, to The Weather Network website. TV viewers across the country were then able to get a glimpse of the picturesque surroundings, and Nukka quickly became an unofficial mascot for our network.

When Beverly would take her camera out, Nukka always sat down on cue and waited for her.

About 6 years ago, Nukka was diagnosed with diabetes, and Beverly was told she had two, probably three years, at the most. She was blind for her last two years but Beverly continued on, taking her for walks, and guiding her every step.

"I went out in pouring rain, I went out in snowstorms, sunny, nice days but she loved the snow the best of all," says Quinlan. When the Weather Network posted a tribute video-sharing news of Nukka's death to viewers across Canada, the condolences began pouring in.

I looked forward to seeing that happy pup in such a beautiful place. Nukka gave me a little shot of what was important when I checked the weather from time to time. I have to admit I was a bit jealous of the life Nukka lived. Thank you Beverly for the moments and RIP Nukka 🌈❤️🐾

"It was beyond my expectations for a tribute for Nukka but I loved it," Beverly says. 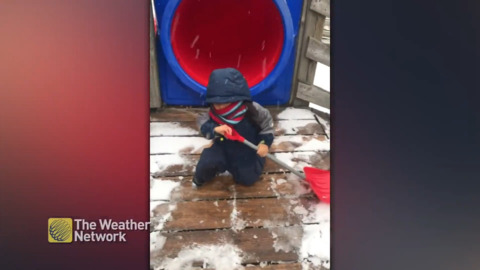